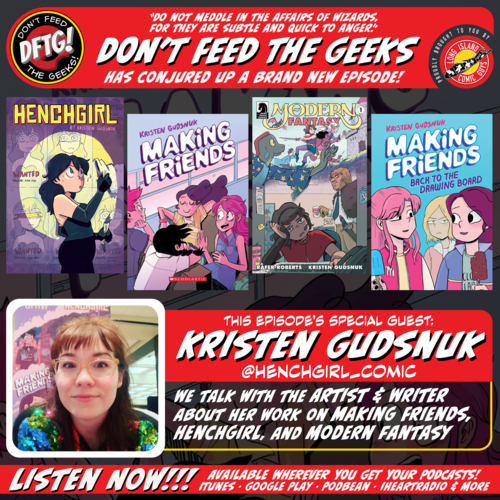 On this episode of “Don’t Feed The Geeks”, the LI Comic Guys sat down with artist & writer Kristen Gudsnuk to talk about her work in the comic industry as well as the creative process behind her awesome books Making Friends, Henchgirl, and Modern Fantasy! We also dissect some huge comic news, including the recent Spider-Man issues with Sony and Disney as well as the insane amount of new material coming out of Disney+ announced at D23!

Be sure to listen and subscribe to us on Apple Podcasts, Spotify, or Google Play Music and leave a review, lets us know what you think. You can reach us at our Official Website, Facebook, Twitter, or on Instagram. Have a follow up thought on anything we discussed then drop us an email at dontfeedthegeeks@licomicguys.com… Thanks for listening!!

To Contact Us for reviews and promotional appearances please email requests@licomicguys.com

To receive ongoing updates and notifications on new episodes, please sign up to our Newsletter and we’ll make sure to keep you in the loop!